“Amid the splendid cast, another standout is John Rothman, as Timon’s trusty chief steward. The actor, who was Emmy-worthy in his role in the Tig Notaro Amazon series “One Mississippi” here shows the same humanity and precision.”

“Standouts in the cast…including John Rothman as the loyal servant whom she turns on.”

“Led by the riveting John Rothman in his turn as Flavius. As level-headed as he is desperate to save her, Flavius speaks from a hard-won knowledge of the nature of his Athens.”

“Another notable performance is delivered by John Rothman as Timon’s faithful and tearful steward.”

“Rothman imbues the play with an air of much-needed dignity and steadfastness.”

“All the Shylocks have their moments, but I was bowled over by the great John Rothman, who plays the role during the concluding trial scene. He rails eloquently, with exquisite world-weariness. It helps that one of his persecutors is played by Linda Powell, a forthright and imposing Portia who’s a worth adversary for the whole pack of Shylocks.”

“As those of us who cover pop culture struggled with the outpouring of stories about sexual harassment, assault and predatory behavior, many rightly pointed to “One Mississippi’s” sensitive portrayal of the ways in which its characters grappled with both childhood sexual abuse and an arrogant harasser in the workplace. The latter storyline, which had clear echoes of the facts that have come to light about executive producer Louis C.K.’s behavior, was extraordinarily well done. But “One Mississippi” is a quiet show that contains multitudes: It continued to be an honest but loving portrayal of the political and social fault lines one particular town, and a portrait of the limits and comforts of family loyalty. I love John Rothman’s Bill so very much, and watching Bill and Tig Notaro’s lead character find love after a profound loss was just lovely.”

“John Rothman, divine as ever!”

“Once again, John Rothman is a joy to watch; if the show merely existed as a Bill delivery system, that would be enough. Whether Bill is instructing Tig and Remy on the proper way to load a dishwasher, reacting to the lazy textual analyses he hears in his book club, or working up the courage to ask a new friend out for dinner, he is always a pure delight. Rothman imbues Bill’s tentative willingness to step outside his comfort zone with deeply winning vulnerability, and yet Bill’s rigidness continues to be an amusing source of family comedy. It’s lovely to watch him contend with the idea that his love of rule-following could be a feature and not a bug for a potential romantic partner.”

“Rothman continues to shine as Bill, Tig’s repressed, tightly wound stepfather. He creaks from the strain of his irritated plans and good intentions, and his journey is easily the most satisfying (it’s hilarious, too).” 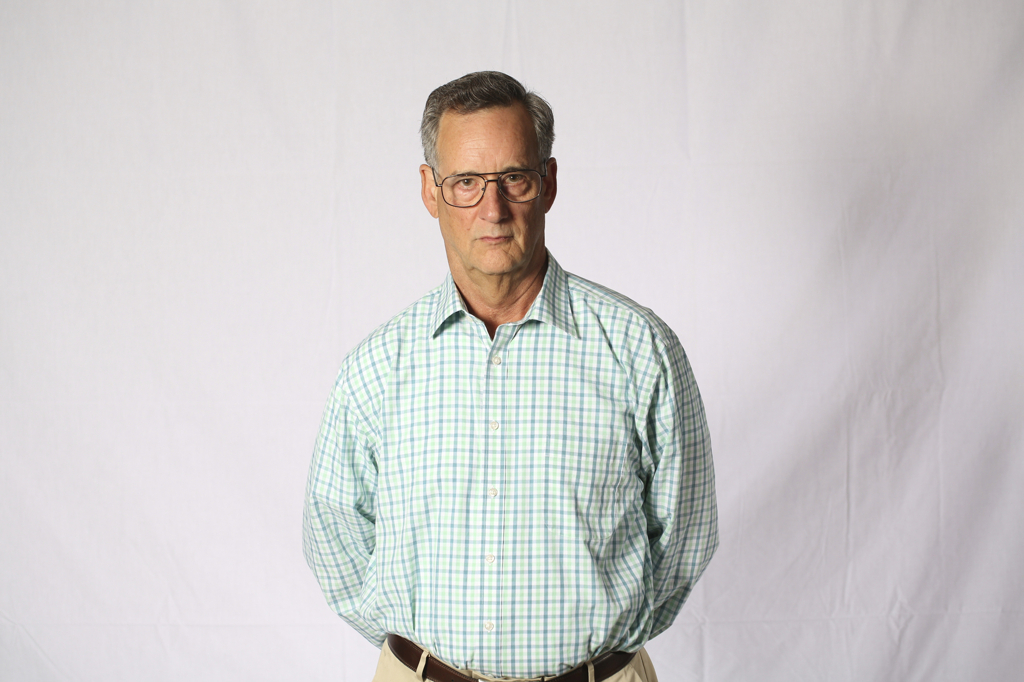 “John Rothman portrayed the various levels of Bill (Tig Notaro’s longstanding step-father on ‘One Mississippi’) so well that even though we immediately sparked to the humorless, ritualistic patriarch, he became all the more lovable, likable, and impressive as his background was unveiled. Credit to the writers, of course, but Bill was brought to life by Rothman’s focused portrayal. He didn’t play too hard into the strict or human moments within Bill’s scenes as he carefully built a complicated man from the ground up. A veteran character actor dating back to the original ‘Ghostbusters,’ we’re hoping this impressive turn allows Rothman the opportunity to explore more roles than ever before.”

“Rothman’s delicate layering of resentment and anger … should be studied by aspiring actors who want to know how to illustrate a basic aspect of the human condition over a long span of screen time without underlining or boldfacing anything. … [The final episode sheds] light on what’s been best about the show. Namely, John Rothman. … Tig Notaro may be the creator and star, but One Mississippi belongs to John Rothman. … His performance is exceptional.”

“Aside from Notaro, the main standout of One Mississippi is John Rothman.“

“The stand out performance of the series comes from Rothman.”

“The marvel of One Mississippi…a beautiful portrait of a man who has just lost his emotional translator.”

“One Mississippi isn’t a one-person project by any means; there’s a stellar turn…from John Rothman.”

Directed by Trevor Nunn, The Theater for a New Audience, Brooklyn / 2016 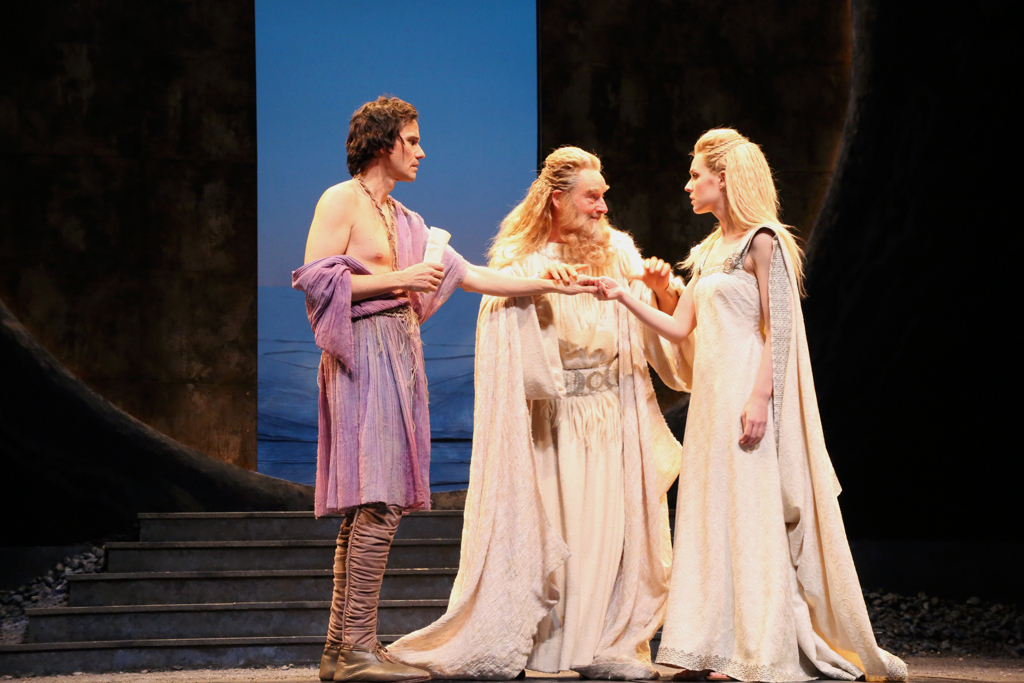 “As Simonides, John Rothman strikes exactly the right tone … delivering it with verve and conviction. Rothman has a twinkle in his eye …. He wins the audience over with his almost panto-like glee ” –Huffington Post

“It is Rothman who makes the most vivid impression … his King Simonides is vitally fun and engaging.” –Hollywood Reporter 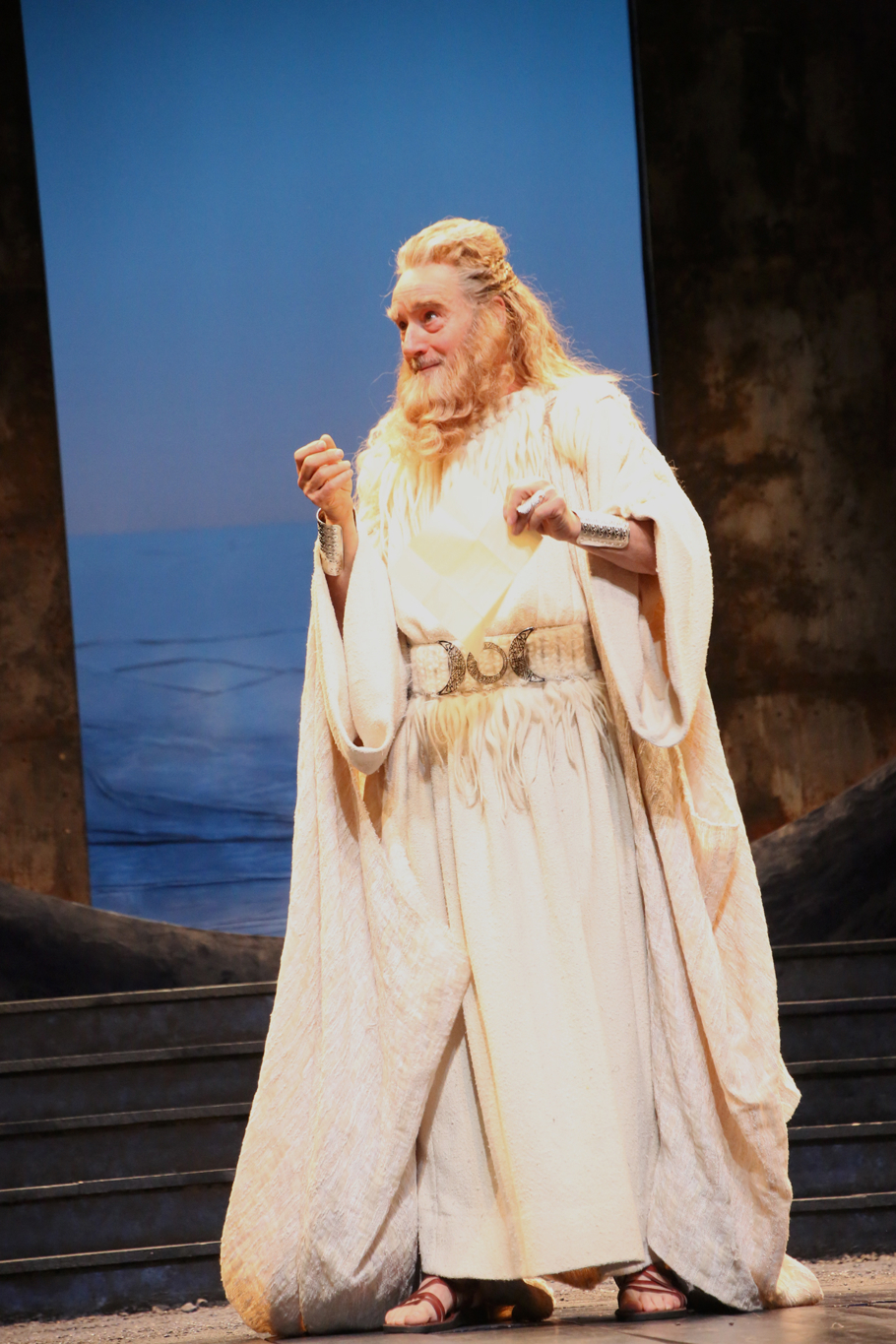 ” JohnRothman’s Simonides is particularly rich.Like all great Shakespearean actors, there is not a vowel he does not embrace. Berkshire Fine Arts 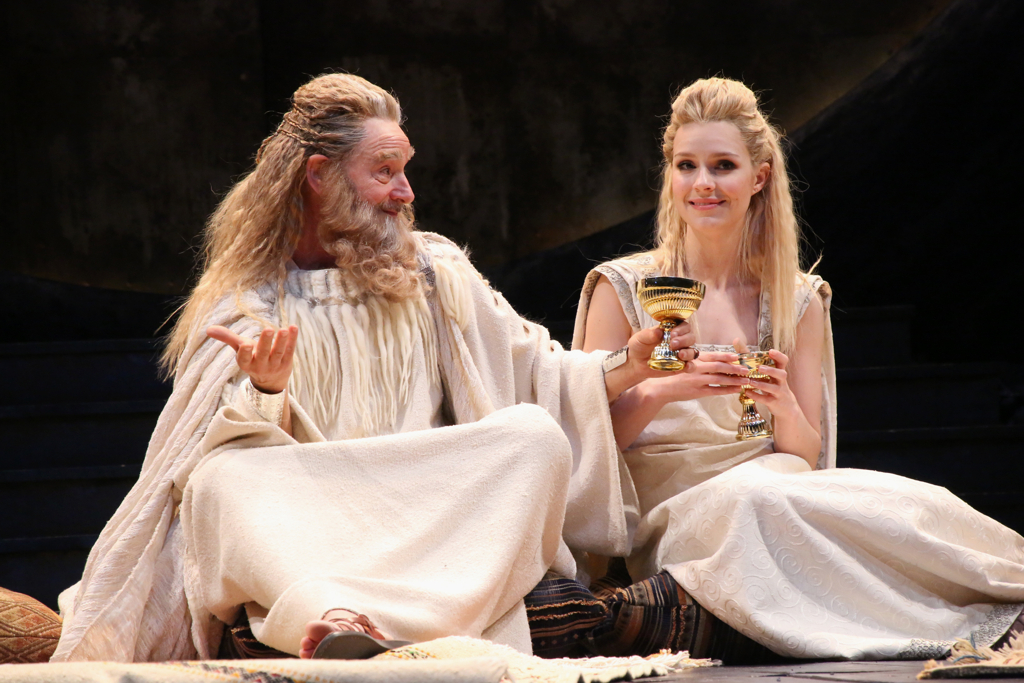 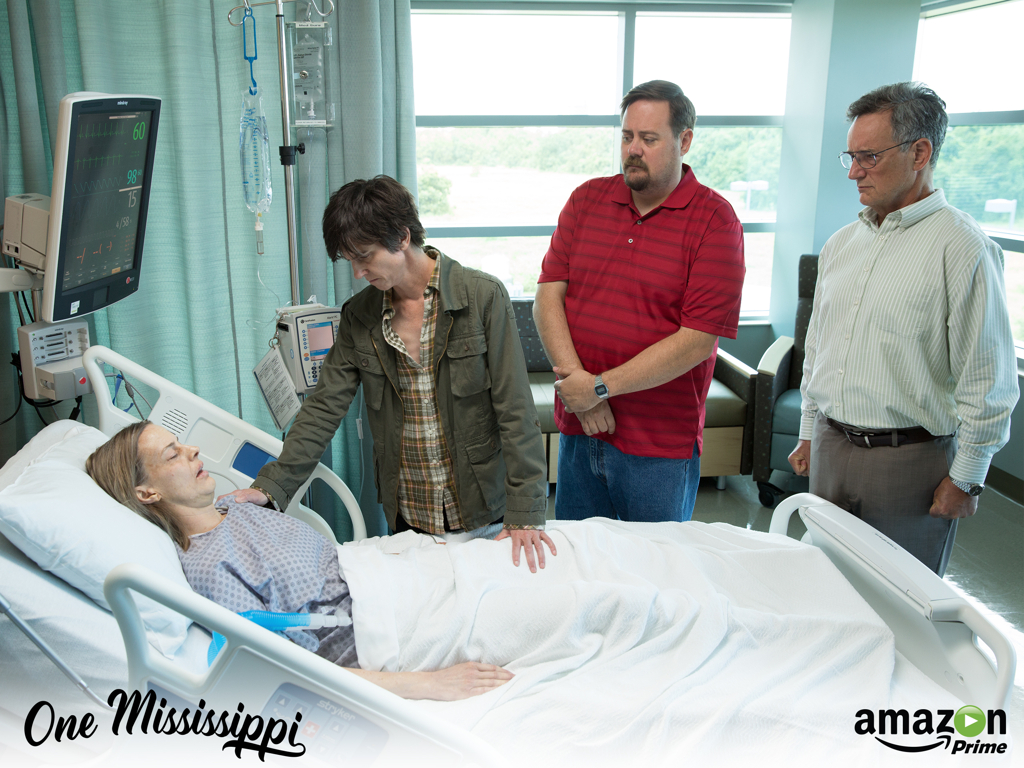 “But like the best stand-up, it is already so acutely observed that you can’t help being pulled in to the comic’s frame of mind. In this context, seeing the stepfather (John Rothman) soften, just a little, toward the end of the episode delivers a surprisingly large payoff.” –Chicago Tribune

THE HOMECOMING, by Harold Pinter 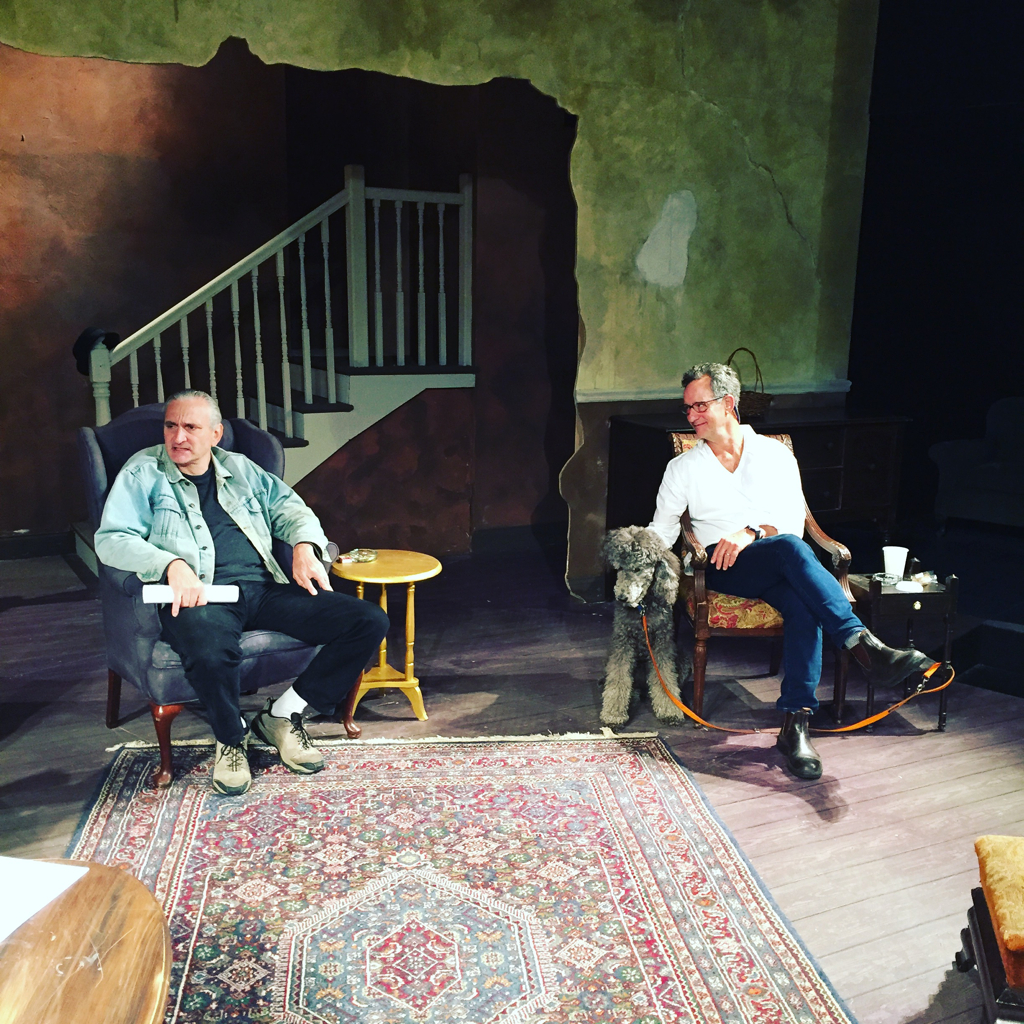 “John Rothman seemed to me perfectly cast as Sam.” — Berkshire on Stage and Screen

THE IMPORTANCE OF BEING EARNEST, by Oscar Wilde

“John Rothman, returning to Center Stage more than 30 after his career-launching fellowship here, did marvelous things with … the good Reverend Chasuble. Rothman conveyed a thoroughly fleshed-out, lovable old coot of a vicar even before uttering a word, and confirmed the impression with an amusingly idiosyncratic vocal style.”, The Baltimore Sun

AWAKE AND SING by Clifford Odets

“. John Rothman … turns Myron into a man of hopeless gentleness. It is Rothman’s small gestures that bring Myron Berger to life.” –The Berkshire Eagle 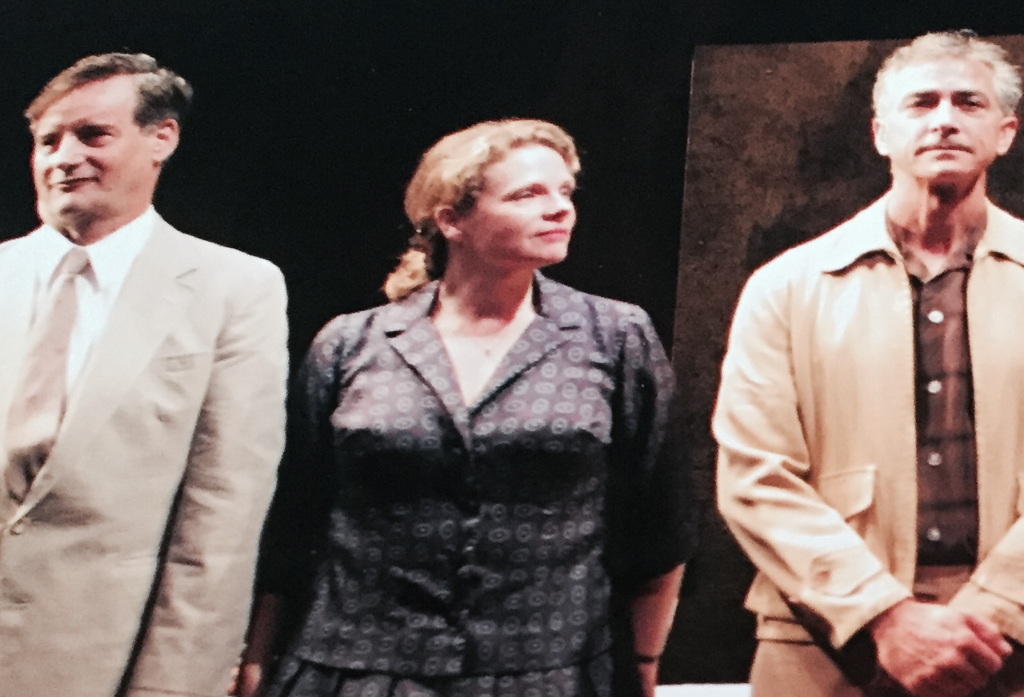 SOME AMERICANS ABROAD, by Richard Nelson 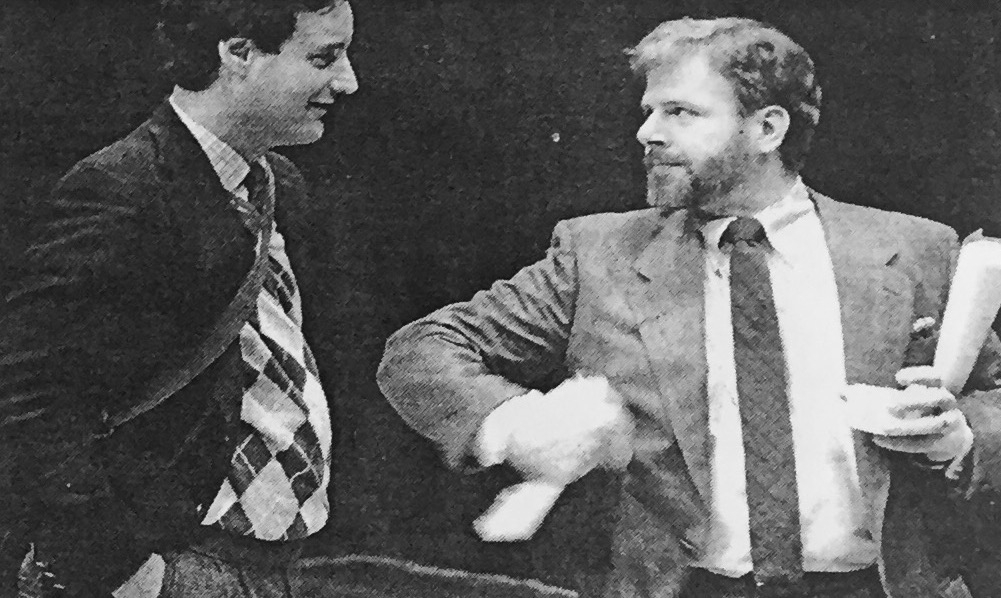 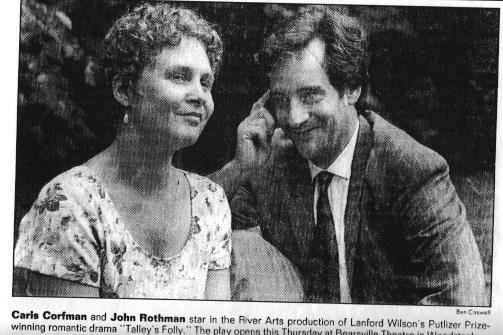 “John Rothman is a richly accented Matt, catching the character’s irony and quirky vitality and the serious determination behind it.” — The Freeman

“Played with humor and conviction by Rothman.” — Woodstock Times

“John Rothman brings an … undeniable warmth to the role of Matt. There’s an ingratiating air about him that makes it almost impossible to see why Sally resists his charms.” — Poughkeepsie Journal

“Best of the lot was John Rothman. … He was the picture of the frightened romantic, terrified to commit but ultimately unable to do anything else. His performance was frighteningly real.” — Chestnut Hill Local

John Rothman- funny and a little sinister at the sme time stands out. Rothman is the unblessed specimen of imperfection and truly moving. Center City Times

“An amusingly beleaguered ladies man about to run out of ladies to run out on…, Rothman also scored as the frantic suicide-line counselor in Hotline.” — Clive Barnes, The New York Post

A FLEA IN HER EAR by Faydeau 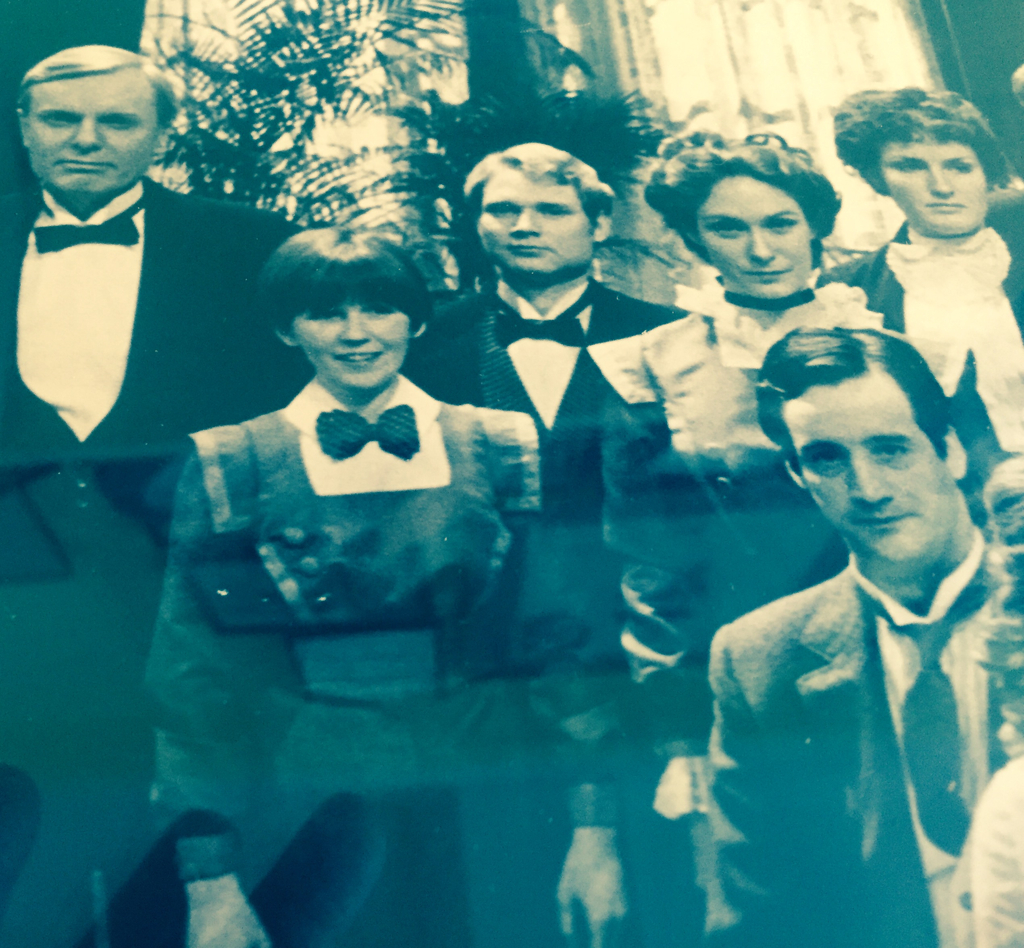 “In Feydeau, even a cameo can be a scene-stealer, as is true with the valet, a role that Laurence Oliver reserved for himself in the National Theater production. At Long Wharf, the valet is played by John Rothman with a deadpan sense of drollery.” — The New York Times

“Standouts include … the affected, witty, likable Ernest of the energetic, sprightly John Rothman whose moves and timing are truly marvelous” — The Hartford Courant

“An actor who shapes performance to suit character is John Rothman as the foppish, juvenile Ernest Wooley. Every time he utters a maxim, Rothman illustrates mannerisms of a personality he has totally absorbed.” — New Haven Bulletin 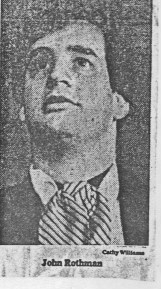 “The leading farceur in this production is John Rothman. Mr. Rothman plays his character, a bridegroom with a wide-eyed innocence (literally wide-eyed, he doesn’t even blink) and deep seated guile. it is a happy combination for farce.” — The New York Times 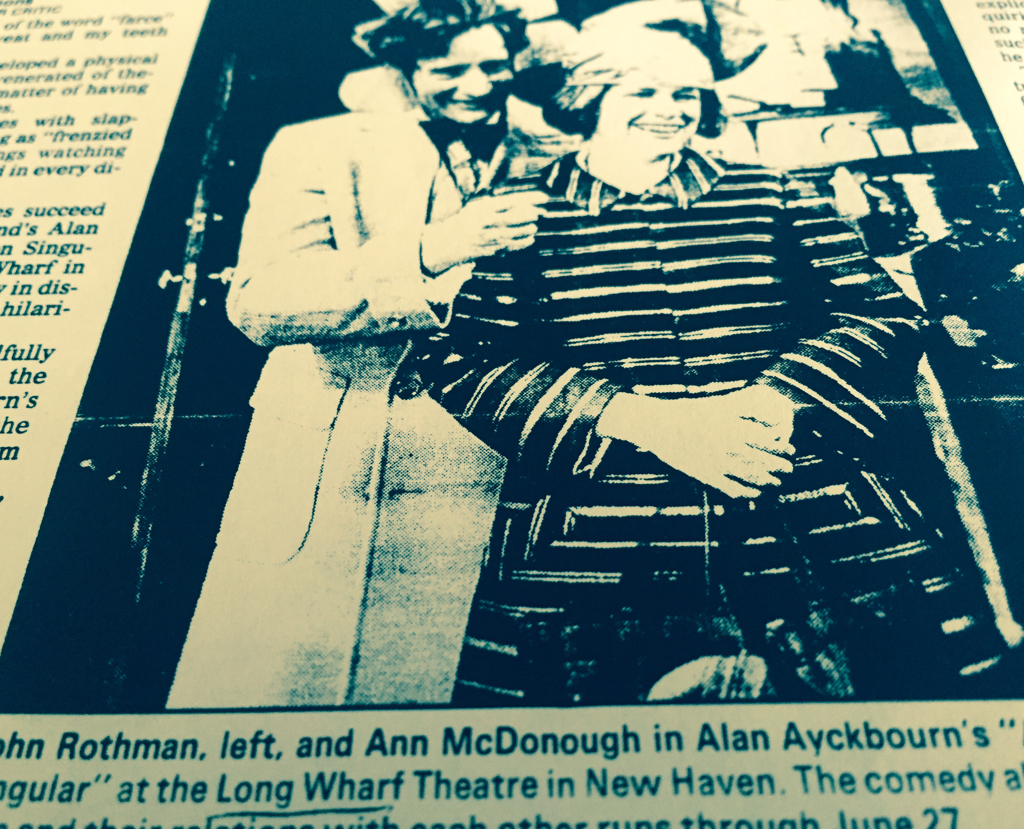 Rothman and McDonough were the best of the bunch.New England Newspaper Agency)

John Rothman draws a ridiculous but engaging portrait of the Great Britain’s new man of the 80s vulgar, able and proud as a peacock of his conquest of an empire, Harford Courant

Both Ann McDonough and John Rothman are hilarious as the lower class couple who prove ambitions enough to have every one literally dancing to their tune by evenings end. The Wall Street Journal 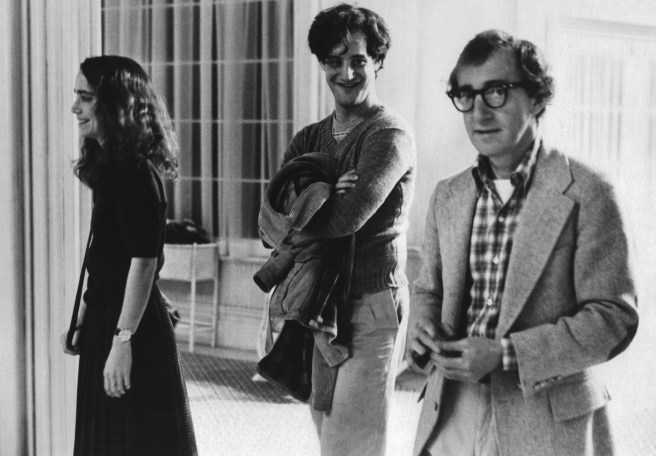 MOVIES Stardust Memories director Woody Allen I giggled all the way through it – …… the excellence of the performances of Miss Rampling, Mari -Christine Barrault and John Rothman – a Columbia University Film teacher and Jessica Harper , his mixed up girlfriend. The Baltimore Sun 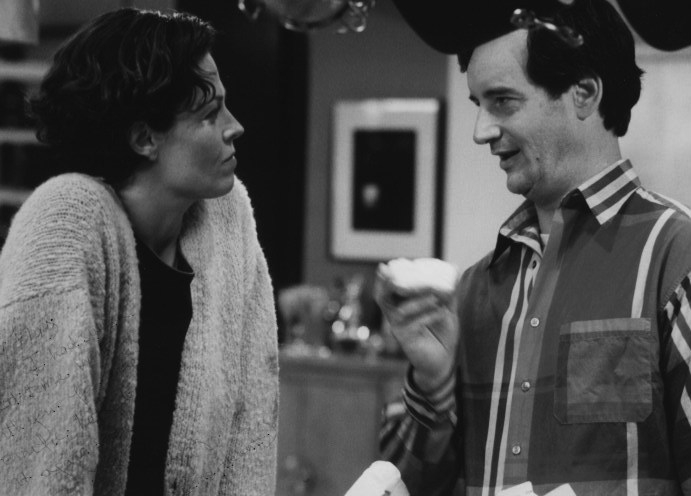 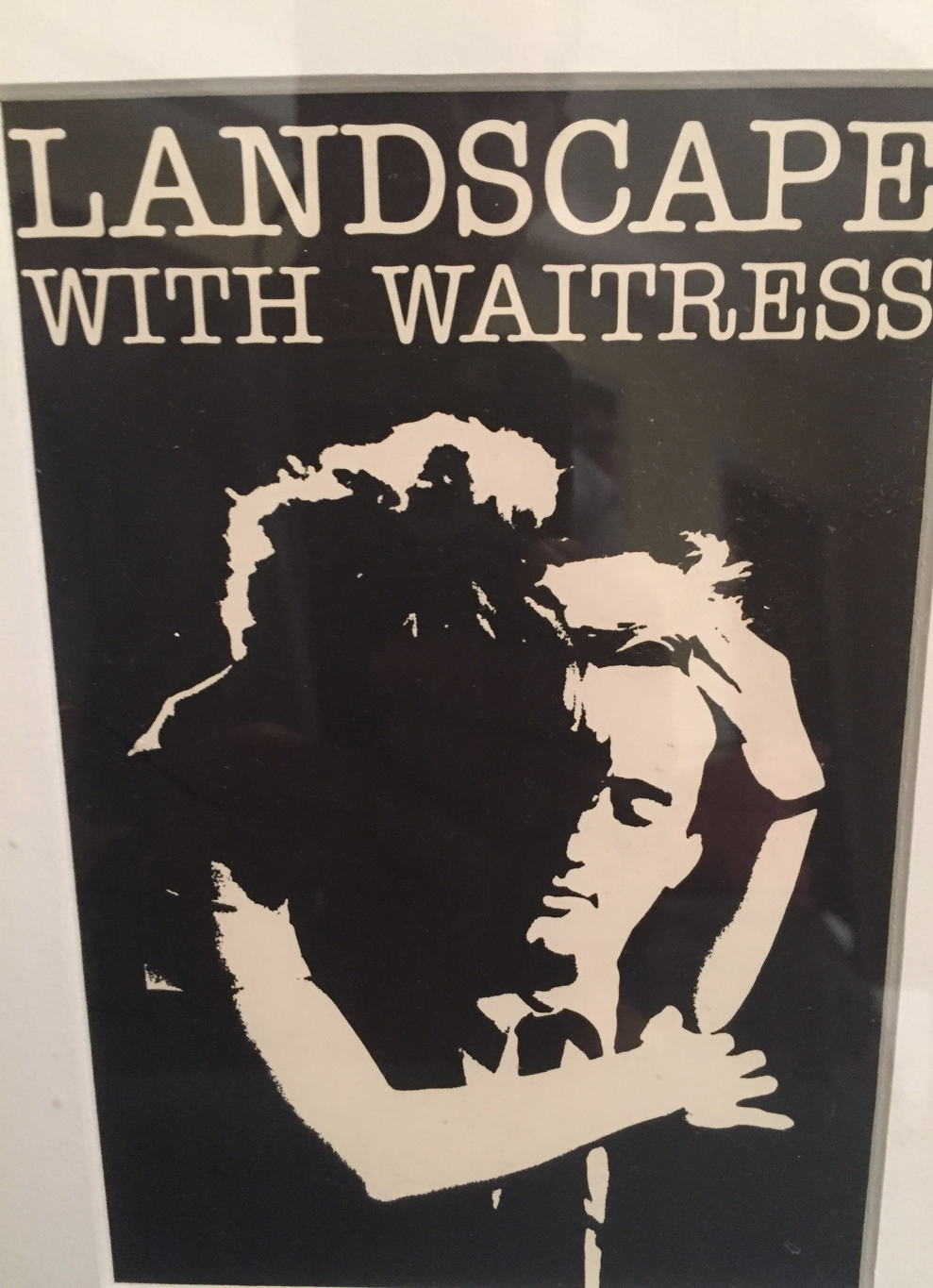 The freshest breath of air I’ve smelled from PSB in a while- Grade A- Jeff Jarvis, Entertainment Weekly 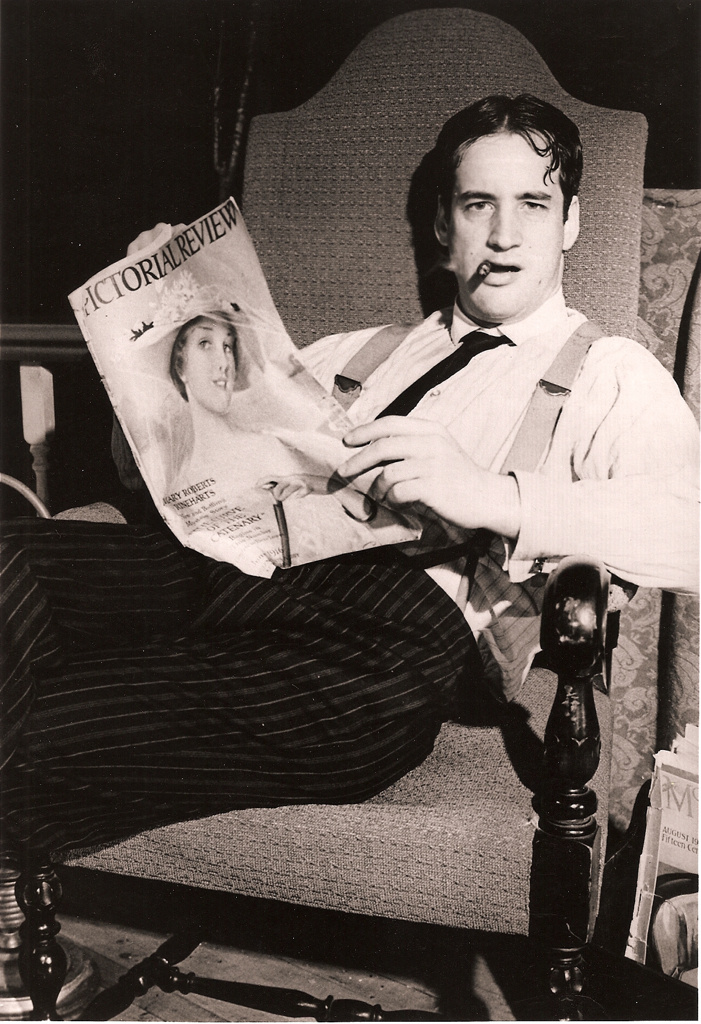 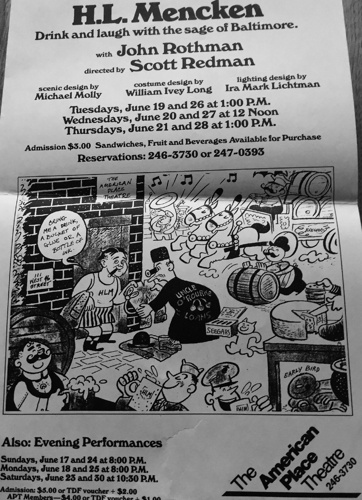